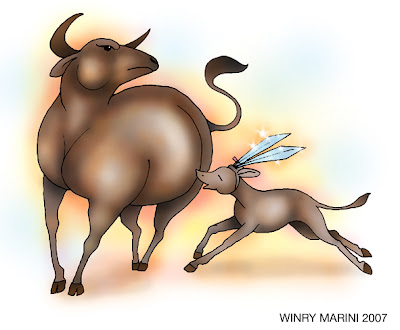 Do you know why the roofs of houses in West Sumatra have the shape of buffalo horns? Here is the story. Once upon a time there was a kingdom in West Sumatra. The people worked as farmers. Their lives were full of happiness. The land was fertile and the weather was always beautiful. The people also had a wise king. He always protected the people.

However, soon their happy lives would be disturbed. Majapahit, a kingdom from Java would attack them. The people were so scared. They were so restless. They went to the king to talk about it. The king tried to calm them down.

"Don't worry, my fellow countrymen. I know Majapahit has many soldiers. They are also great in war. If we fight them, maybe we lose. But I have an idea how to beat them," said the king.

"We have to make sure our buffalo will win, Your Majesty. How?" asked one of the people. The king smiled.

He continued, "We just need to find a strong baby buffalo."

Then the king took two sharp knives and attached them strongly to the baby buffalo horn. Now it was time for the buffalo battle. Everyone gathered on the field. The Majapahit soldier released a big and wild buffalo out of his cage. Everyone was surprised with the size of the buffalo.

Later, the West Sumatran released their baby buffalo. The Majapahit soldiers were laughing.

Then, the king changed the name of the kingdom into Minangkabau. It means "victorious buffalo." That is why the roofs of the houses in West Sumatra are similar to the form of buffalo horns and the traditional headdress of the women of West Sumatra is also like buffalo horns. ***