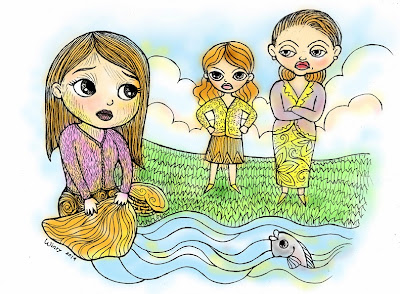 BAWANG Putih lived with her stepmother and her stepsister, Bawang Merah. Bawang Putih's mother died when she was a baby. Her father remarried another woman and later her step sister was born.

Unfortunately, not long after that her father died. Since then, Bawang Putih's life so sad. Her stepmother and her step sister treated Bawang Putih badly and always asked her to do all the household chores.

One morning, Bawang Putih was washing some clothes in a river. Accidentally, her mother's clothes were washed away by the river. She was really worried so she walked along the riverside to find the clothes. Finally she met an old woman. She said that she kept the clothes and would give them back to Bawang Putih if she helped the old woman do the household chores.

Bawang Putih helped her happily. After everything was finished, the old woman returned the clothes. She also gave Bawang Putih a gift. The old woman had two pumpkins, one pumpkin was small and the other one was bigger. Bawang Putih had to choose one.

"Bawang Merah, hurry up. Go to the river and throw my clothes into the water. After that, find the old woman. Remember, you have to take the big pumpkin," the stepmother asked Bawang Merah to do exactly the same as Bawang Putih's experience.

Bawang Merah immediately went to the river. She threw the clothes and pretended to search them. Not long after that, she met the old woman. Again she asked Bawang Merah to do household chores. She refused and asked the old woman to give her a big pumpkin.

The old woman then gave her the big one. Bawang Merah was so happy. She ran very fast. When she arrived home, her mother was impatient. She directly smashed the pumpkin to the floor. They were screaming. There were a lot of snakes inside the pumpkin! They were really scared. They were afraid the snakes would bite them.

"Mom, I think God just punished us. We had done bad things to Bawang Putih. And God didn't like that. We have to apologize to Bawang Putih," said Bawang Merah.

Finally both of them realized their mistakes. They apologized and Bawang Putih forgave them. Now the family is not poor anymore. Bawang Putih decided to sell all the jewelries and used the money for their daily lives. ***