The Legend of Kemaro Island 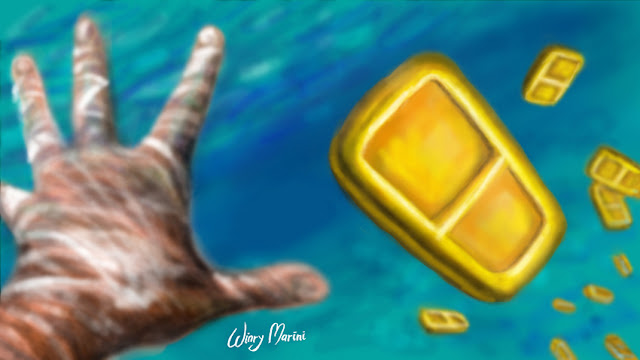 A long time ago, there was a kingdom in South Sumatra. The king had a very beautiful daughter. Her name was Siti Fatimah. She was single. Many young men fall in love with her. However, they did not have the courage to propose to her. The king wanted his daughter to marry a rich man.
One day, a ship from China arrived. The captain of the ship was Tan Bun Ann. He was a prince. He came to South Sumatra to do business. He was a merchant. He planned to stay for several months. He came to the palace to meet the king. He wanted to ask the king's permission.


"I will let you stay here and do this business. But remember, you have to share your profit. You have to give half of your profit to the kingdom," said the king.
"I agree, your majesty," said Tan Bun Ann.
Since then, Tan Bun Ann often came to the palace. He met Siti Fatimah several times.
He really admired her beauty. He tried to find out more about her. He asked his man to ask the people about her.

Tan Bun Ann wrote a letter to his parents in China and told them about Siti Fatimah. The parents agreed and sent him nine big jars filled with gold. To cover the gold from the thieves, the parents put some vegetables on top of the gold.
Later, the nine big jars arrived at the Musi River pier. Tan Bun Ann immediately looked for the jars. He was so surprised. When he opened the lid of the jar, he saw rotten vegetables. He only looked at the top of the jar. He did not search at the bottom of the jars.
"Hmmm...Maybe the gold is in the second jar," thought Tan Bun Ann. Again, he did not find the gold. He was so angry. He threw the jars into the river. Every time he did not see any gold in the jar, he always threw it into the river. And finally, he opened the last jar. Again, he did not see any gold. This time he was so tired. He did not have any power to throw the jar into the river. Instead, he smashed the jar with a big stone.

And when the jar was broken, Tan Bun Ann found the gold! He knew he had made a mistake. He immediately jumped into the river. He wanted to collect the gold.
Siti Fatimah saw what was happening. She waited for Tan Bun Ann at the river bank, but he never showed up. She was impatient. She also wanted to jump in and help him.
Before she jumped, she left her guards a message, "If you see a pile of soil on the river bank, that means it is my grave." Then she jumped into the river.
The guards waited and waited. And for several days, the people saw a pile of soil. The soil was getting bigger and bigger. It finally became an island. The people named it Kemaro Island. Kemaro is from the word kemarau, which means drought season. People named it that because the island is never drowned, although the level of the water in the Musi River is high. ***