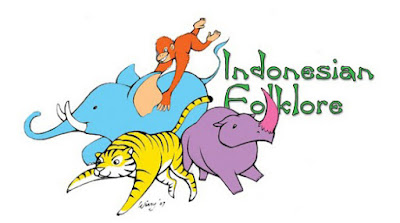 Indonesian Folklore can be described as Indonesian traditional art, literature, knowledge, and practices that are passed on in large part through oral communication and example. (sites.google.com)

We can find moral of the story of Bawang Merah and Bawang Putih. We can also learn about the name of Cianjur City come from Ci means water and anjur from the word anjuran. It means suggestion.

Indonesian Folklore allows people to give meaning of their lives and their surroundings.

By keeping these old folklores alive, the next generations will know the stories and learn the wonderful meanings behind them.

Folklore is the traditional art, literature, knowledge, and practice that is disseminated largely through oral communication and behavioral example. This includes folktales, myths, legends, beliefs, practices, superstitions, etc. Every group with a sense of its own identity shares, as a central part of that identity, folk traditions–the things that people traditionally believe (planting practices, family traditions, and other elements of worldview), do (dance, make music, sew clothing), know (how to build an irrigation dam, how to nurse an ailment, how to prepare barbecue), make (architecture, art, craft), and say (personal experience stories, riddles, song lyrics). As these examples indicate, in most instances there is no hard-and-fast separation of these categories, whether in everyday life or in folklorists’ work.

The word "folklore” names an enormous and deeply significant dimension of culture. Considering how large and complex this subject is, it is no wonder that folklorists define and describe folklore in so many different ways. Try asking dance historians for a definition of "dance,” for instance, or anthropologists for a definition of "culture.” No one definition will suffice–nor should it.

In part, this is also because particular folklorists emphasize particular parts or characteristics of the world of folklore as a result of their own work, their own interests, or the particular audience they’re trying to reach. And for folklorists, as for the members of any group who share a strong interest, disagreeing with one another is part of the work–and the enjoyment–of the field, and is one of the best ways to learn. afsnet.org

In every culture, folklore and folktales play a significant role. Both are passed down from one generation to the other through word of mouth. The key difference between folklore and folktale is that the folklore refers to the traditional beliefs and stories of a community. This usually encompasses a large variety of components ranging from one’s cultural practices to material culture. Folktales, on the other hand, refer to the stories that have been passed down from the ancestors of a particular group of people to the younger generations. This highlights that folktales are a part of folklore. They include the stories that belong to a group of people that are passed down orally. This is the main difference between the two words. (source)

Folklorists gather data by studying folklore first hand, through what is termed fieldwork. This entails questioning and interviewing people about their own folklore.

In some cases the folklorist remembers what their interviewees say, allowing them to later recollect it either orally or in writing. It can also entail making written notes during the interview, or using mechanical recording methods such as video, photography, and tape recording, the latter of which is the method most often employed by folklorists. The choice of recording medium is often informed by the circumstances and nature of that which is being recorded; for instance a folk dance would best be recorded using video.

Approaches to the study of folklore vary; some folklorists specialise on a specific folklore genre, for instance becoming a specialist in folk tales, folk songs, or folk art. An alternative approach focuses on the study of a "folk group", studying the various forms of folklore present within a given group of people. A third approach incorporates the study of folklore as a sub-field of another discipline, such as literature studies, anthropology, history, or linguistics.

Increasingly, folkloristics has come to intersect with other disciplines, with which it shares topics of interest. Much inter-disciplinary research has resulted from this. Courses in folkloristics are widely available at universities and colleges in the United States, with some also awarding degree programs in the discipline. wiki