Ratna Ayu Wideradin and the Monkey 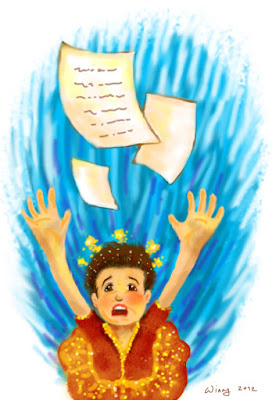 Once upon a time, there was a kingdom in Lombok, nusa Tenggara Barat. The king had nine beautiful daughters. However, the youngest princess was the most beautiful one. Her name was Ratna Ayu Wideradin. Other princesses were jealous. They were thinking how she just stayed in the palace and people would not able to see her anymore.

They finally had an idea. They told the king that Princess Ratna Ayu Wideradin stole her sister's jewelry. They tried hard to influence the king and sadly the king finally believed it. He punished his youngest daughter. She was not allowed to leave the palace until she returned the jewelry. Of course it made Princess Ratna Ayu Wideradin very sad. She did not steal anything, therefore she could not return it.


Everyday, the princess just stayed inside the palace.
She was not allowed to go to other places. She was so sad. She could not play or meet her friends.

The princess spent the time by writing. She expressed her feelings on the pieces of papers. She wrote how sad she was. She wrote that she did not understand why her sisters accused her of being a thief. She never stole anything.

It was a windy day. The princess was writing in the garden. Suddenly the wind blew the papers. They all were flying to the sky. The princess tried to save the papers, however she lost one. It was flying high above the sky and it went very far from Lombok. The paper landed in a kingdom in Java! A prince accidentally got the paper and he read it.

His name was Prince Witarasari. His people loved him. He was a handsome and powerful prince. He was wise and always protected his people. The prince had supernatural power.

The prince wanted to help the princess. With his power, he went to Lombok easily. The prince knew he could not enter the palace as a prince. So he changed himself as a monkey.

The monkey looked for the princess. When he met her, the monkey talked. “Why do you look so sad, Princess?“

The princess was so shocked. She never saw a monkey who talked like a human before. After she calmed down, then she told the monkey why she was punished. She told him that she felt very lonely. She did not have any friends in the palace.

“Don't worry, My Princess. I will be your friend,“ said the monkey.

The sisters saw the monkey. They all were also surprised that Princess Ratna Ayu Wideradin had a talking monkey. They became more jealous.

The king agreed to her daughters' request. He held a great party and asked all her daughters to dance and that included Princess Ratna Ayu Wideradin.

The princess was so surprised to see the monkey changed into a handsome man. Later they went to the party. People were so amazed when they saw them. They all said that the prince and the princess were a perfect match.

The king asked who the prince was. He introduced himself and he also told the king about her daughters' bad behavior to Princess Ratna Ayu Wideradin. He could prove it.