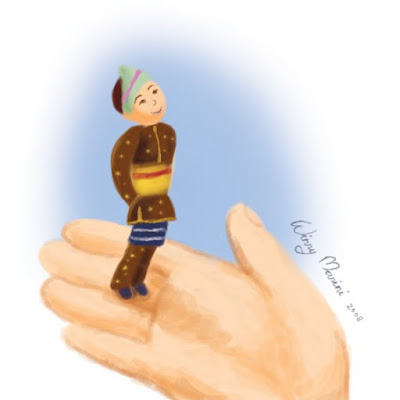 A long time ago in Bangka Belitung lived a husband and a wife. They were poor and they did not have any children yet. Days and nights they prayed to God. They really wanted to have a child.

“God, please give us a child, even though he is only as big as a little finger,” prayed the husband.
Their dream came true! The wife was pregnant.

However they were surprised when they saw the baby. He was so small. He was as big as a little finger.

“You prayed to God to give us a child, although he is as big as a little finger right? Be thankful to God. Let’s love him. How will you name him then?” asked the wife.

“You are right. We have to be grateful. Well, I will name him Kelingking,” said the husband. Kelingking means little finger or pinkie.

Time passed by and Kelingking did not grow much. His body was still physically small compared to other kids. Though he was so small, Kelingking ate like adults. He ate much food. And that made his parents really worried. They were poor and sometimes they could not eat because they had to give their food to Kelingking.

“I cannot hold it anymore. I want to put Kelingking in the jungle. Let him live there. I think he can survive,” said the father.

“Father, where do you want me to put this big tree?” asked Kelingking.

The father was surprised. He asked Kelingking to put the tree in the backyard. Kelingking then went inside the house. As always he ate all the food and that made his father got angry. He then had another idea.

“Kelingking, let’s go to the mountain. I need a big stone from there.”

Kelingking was an obedient kid. He followed his father to go to the mountain. When they arrived, his father pointed a big stone. The stone was as big as their house!

“I want you to bring that big stone to our house,” asked the father.

When Kelingking was trying to bring the stone, the father immediately ran home. At night, when the father was sleeping , suddenly he heard Kelingking’s voice.

“Father, I’m home. Where do you want me to put this big stone?”

This time Kelingking’s father realized his mistake. It was true that Kelingking’s body was small and he ate much food. But he was a nice kid and he had great power. With that power, they could get a job and had a lot of money. The father then apologized to Kelingking. Since then they always worked together. ***