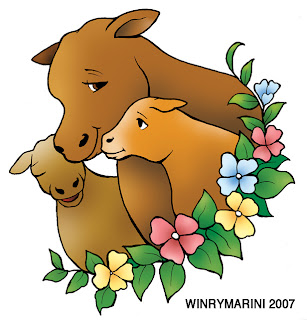 
SIRANGGIR was a cow. She had some children. Every day they went to a field to eat some grass with their owner, Aji Tonggal. He was a young man and he loved his cows very much. He even could talk with them.

Aji Tonggal and his parents build a new house for them. The people had a tradition. Before a family stayed at their new house, they had to sacrifice a cow. So, the father asked Aji Tonggal to sacrifice the biggest cow they had. And it was Siranggir, the mother cow.


Siranggir was very sad. But Aji Tonggal had to listen and obey his parents. So, he went to Siranggir and explained what happened. Siranggir knew about the tradition, and he also knew that sooner or later she would also be sacrificed.

"Don't worry, Aji Tonggal. I'm ready to be sacrificed. Please promise that you will always take care of my kids after I have gone. And I have a request. Give me time to talk to my children. I want to say goodbye to them," said Siranggir.

All the children were very sad. They did not want to lose their mother. They understood about the tradition after their mother explained it to them.

Then, it was time for the ceremony. Aji Tonggal did not have the heart to kill his beloved cow. He asked somebody else to do that. After Siranggir was killed, Aji Tonggal's parents shared the meat to the neighbors. The family still kept Siranggir's head. The head was hung in the kitchen.

Several days after the ceremony, a strange thing happened to the family. Every morning, the family went to the field and when they arrived home in the afternoon, they always had food in the kitchen. The food was enough for the whole family.

Aji Tonggal was really curious. One day, he went home earlier. He saw a beautiful girl was cooking in the kitchen. Slowly he walked towards the girl, and grabbed her hand.

"Please let me go. I will explain everything. I am Siranggir. Even though I'm dead, I still want to dedicate my life to you. That's why I transformed my life into a girl," said the girl.

Aji Tonggal then fell in love with the girl. After that, he talked to his parents. He wanted to marry the girl. The parents agreed. Once again the family had a ceremony. This time, it was a ceremony for their marriage. ***