The Story of Panyalahan Village (The Faithful Tiger) 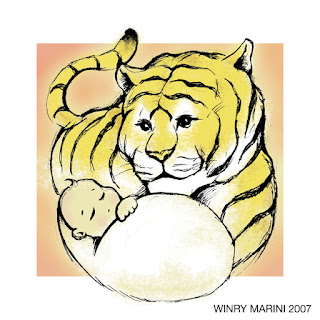 A Folklore from West Java

LONG time ago in Tasikmalaya, West Java, lived a young couple. They were farmers. They lived happily with their baby. The couple also had some animals. One of them was a tiger. When the couple went to work in the paddy field, the tiger looked after their baby.

As usual, the couple went to the paddy field. Before they left, they asked the tiger to look after their baby.


“We will go to the field now. Look after our baby, okay?” 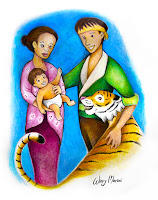 So, the couple went to the field. They worked from morning until afternoon. When the couple arrived home, the tiger welcomed them. The tiger acted differently. He wagged his tail and rubbed his body to the couple’s legs. He looked very happy. The husband became suspicious.

“Why does this tiger behave strangely? He does not act as usual,” he thought.

The husband looked at the tiger carefully. He was shocked. The tiger’s mouth was full of blood. Then he remembered his baby. He thought the tiger had eaten the baby.

“Why is your mouth full of blood?” he asked the tiger.

“You must have done something bad for my baby! Have you killed him? Why did you do that?” he was very panicked.

The husband took his knife and killed the tiger in anger. Then they both entered the house. They were shocked. They looked at each other. Their baby was sleeping peacefully in his cradle. He was not eaten by the tiger.

Quickly, the wife took the baby and kissed him. The baby woke up. He opened his eyes and smiled. The couple found a very large snake under the cradle. The snake was dead and full of blood.

The couple felt very guilty. They have killed their faithful tiger. It all happened because they did not check the baby first before they killed the tiger.

Since then, the couple’s village was called Panyalahan. The word Panyalahan derives from the word “nyalahan”, which means “wrong guess”. ***


There were three kinds of tigers in Indonesia, two of them are extinct
They are/were Bali Tiger, Javan Tiger and Sumatran Tiger