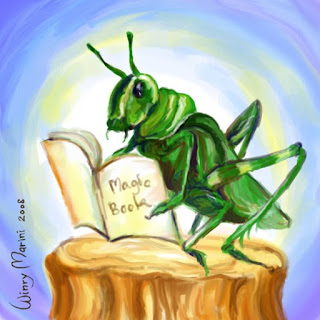 Pak Belalang was famous. He had a magic book that could tell everything. He always learned something every time he read the magic book.

It was a beautiful evening. Pak belalang had some guests. Suddenly he asked his son to get him the magic book. He wanted to show his magic ability to the guests.

After reading the magic book, he said, "I think there is a mouse in the trap."

His son immediately went to the kitchen and took the mousetrap. Pak Belalang was right! There was a mouse caught in the trap.

The guests were surprised of Belalang's magic book. After all the guests went home, Pak Belalang laughed.

Yes, Pak Belalang was a liar. He actually did not have a magic book. It was just an ordinary book. He lied because he wanted to be famous.

One day, the king called Pak Belalang to the palace to find the missing jewelry. The king gave him seven days to find it. Pak Belalang knew that if he could not find the jewelry, he would be punished. He would go to jail.

Pak Belalang went to every place to find the jewelry. On the seventh day he still could not find them. So, he held a farewell dinner with his family.

Pak Belalang said to his wife, "Please make some pancakes."

When the first pancake was ready, Pak Belalang said, "This one is yellow. Please make another."

When the second one is ready, he said, "This is too brown, make me another one."

Within every pancake, Pak Belalang said too dark, too fat, too thin, and so on. Meanwhile, Pak Belalang did not know that some thieves were hiding under his house. Those were the thieves who stole the king's jewelry.

A moment later, the seven thieves knocked on his door.

They cried, "Please help us, Pak Belalang! We will return the jewelry. We promise not to steal anymore!"

Pak Belalang then brought the jewelry to the palace. The king was so happy and gave him great gifts.

Pak Belalang was so thankful. He promised himself not to lie anymore. Next time he wouldn't be lucky. He could be punished for his wrong doing. ***