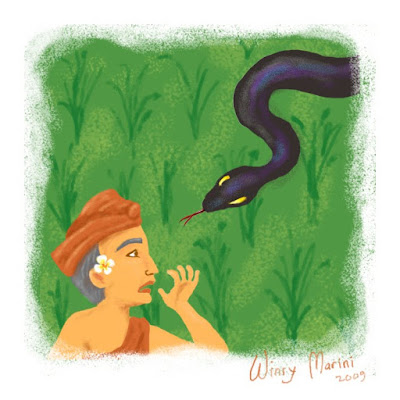 A long time ago, there was a small village in Bali. The villagers were farmers. They were very happy. The gods gave them fertile land. They always had a great harvest. There were no poor family in that village.

"My name is I Tundung. I came here to work, Sir. I promise I will work hard."

"Hmm... Okay, I will let you work in my rice field. But remember, I will ask you to leave if you are lazy." said Jero Pasek.

I Tudung was very happy. He did not want to disappoint Jero Pasek, his master. He worked diligently and patiently. Jero Pasek was very grateful. The harvest was a good deal better. Besides cultivating, I Tundung also look care of the animals, such as chickens, ducks, goats and cattle. The number of the animals also increased. Jero Pasek become richer.

However, I Tundung accepted it very happy. He felt that Jero Pasek had already trusted him. He wanted to repay his trust by giving him great harvest.

The land on the hill was arid. It was very dry. However, I Tundung was never given up. There was a small spring. I Tundung made irrigation. He used the water in the spring and flew it through the irrigation.

It worked! The ground was not dry anymore. The plants grew very well. And again they delivered an outstanding harvest. Now the whole hills are green, thanks to I Tundung.

Unfortunately, their happiness did not last long. A thief stole the harvest and the animals.

Sadly, I Tundung was never able to catch the thief. The harvest and the animals kept on missing, Jero Pasek was angry.

"I'm very disappointed in you. I have lost a lot of harvest and animals!"

I Tundung was sad. He went to a temple to pray. While he was meditating, he heard a voice.

"I recognize your problem and I can help you."

"Thank you. I'm willing to do anything as long as I can protect my master's harvest and animals." said I Tundung.

"I will change you into a big black snake. You will live on the hill and you can protect the harvest and the animals."

I Tundung agreed. He did not want to take his master disappointed and angry at him. Slowly, he changed into a big black snake.

Meanwhile, Joko Pasek was looking for I Tundung. And when he arrived at his field, he saw a big black snake. He was so surprised when the snake was able to speak!

"Don't be afraid, Sir. It's me, I Tundung. From now on, I will always protect your harvest and your animals."

Jero Pasek was very distressing. He never meant to ask I Tundung to do anything. But it was too late. ***

Subak is the name of water management (irrigation) system for paddy fields on Bali island, Indonesia which was developed more than 1,000 years ago. For Balinese, irrigation is not simply providing water for the plant's roots, but water is used to construct a complex, pulsed artificial ecosystem. Paddy fields in Bali were built around water temples and the allocation of water is made by a priest. (wikipedia.org)