Putri Bungsu and the Dragons 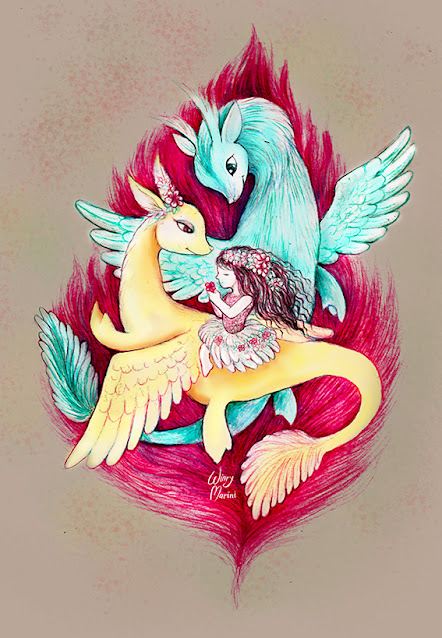 ONCE upon a time, there were two dragons lived in Aceh. The dragons were male and female, they were husband and wife. The dragons really wanted to have a child. They always prayed to God to give them a child.

One day the dragons were resting at the river side. Suddenly they saw a baby beside a basket. The basket was drifting by the current of the water.

"My husband, look! There is a human baby inside the basket. Let's save the baby!" said the mother dragon.

The father dragon immediately swam fast. He brought the baby to the side.

She was a baby girl. The dragons were very happy. They had a child. Although the baby was a human child, the dragons really loved her. They named her Putri Bungsu.

Days passed by, Putri Bungsu was adult. She was very beautiful. The dragons always took care of her. They also always protected her.

In mean time, putri Bungsu real parents were looking for her. There was an incident and accidentally Putri Bungsu was drifting in the river.

After years looking for her, Putri Bungsu's real parents finally found her.

"My child, thank God we finally found you. You are our daughter. We know it from the mark in your hand," said the mother.

The dragons were angry! they said Putri Bunsu was their daugter.

"No! She is our daughter! We have raised her since she was a baby. We loved her and she loved us," said the mother dragon.

They were arguing and they did not get any solutions. Putri Bungsu's real parents asked for help. They asked Tuan Tapa to help them. Tuan Tapa was a holy man. He also had supernatural power.

Tuan Tapa then asked the dragons to let Putri Bungsu leave and stay with her real parents. The dragons were angry. They asked Tuan Tapa not to interfere.

Tuan Tapa realized that the dragons could not negotiate. Therefore Tuan Tapa challenged them to fight.

"If you win, you can keep her. However you have to let her go and stay with her real parents if you both lose the fight," said Tuan Tapa.

Then Tuan Tapa and the dragons were fighting bravely. Although he was alone and had to fight with two dragons, Tuan Tapa was very brave. he used all his skills to fight them.

The mother dragon was very angry. She wagged her tail. It broke an island into two small islands. people named the islands as Pulau Dua.