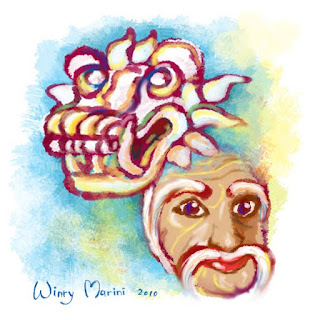 PRABU Maha Sila was a king. He had a beautiful daughter. Her name was Princess (Putri) Luh Cendrasari. Many young men fell in love with her. They wanted to propose her to be their wife.

The king asked his daughter to choose carefully. Some of the men were princes from other kingdom. The king did not want to make the men disappointed and it would start a war.

Putri Luh Cendrasari understood. She held a competition. She would marry a man who could bring her the eyes and the scales of a white dragon. All the participants agreed. They started to look for a white dragon.

It was not easy to find a white dragon. Some of them climbed the mountains and some of them swam in the sea. However they still could not find the white dragon. One by one the participants gave up.

One of the participants was Manik Angkeran. He was not a prince. He was just a villager. Manik Angkeran really wanted to marry Putri Luh Cendrasari. Actually the princess also fell in love with Manik Angkeran.

"What will you do to win the competition?" asked the teacher.

"I will do anything, Master. If I have to sacrifice my soul, yes... I will do it, said Manik Angkeran.

"I really admire your persistence. I can see that you really love her. And I also really love you, Manik Angkeran. And I will do anything to make you happy."

The teacher continued, "Actually I am a white dragon. Gods allowed me to be human," said the teacher.

Later an amazing things happened. The teacher slowly turned into a white dragon. Manik Angkeran was very surprised. He did not know that his teacher actually a white dragon.

Manik Angkeran was very sad. He lost his beloved teacher. He immediately went to the palace. The princess was happy. The winner was Manik Angkeran. They soon got married.

Not long after that the princess was pregnant. Everybody was happy except Manik Angkeran. He knew he had to fulfill his promise. He would die soon.

The Gods answered, "It's not your time to die. You are pregnant."

"But I really want to be with my husband," said the princess.

Actually the gods did not want to take Manik Angkeran's spirit. They just want to test the princess if she really loved him, knowing that he was just a villager, The gods answered her request. Slowly Manik Angkeran came back to life.

He lived again. Since then Manik angkeran and Putri Luh Cendrasari lived happily ever after.***