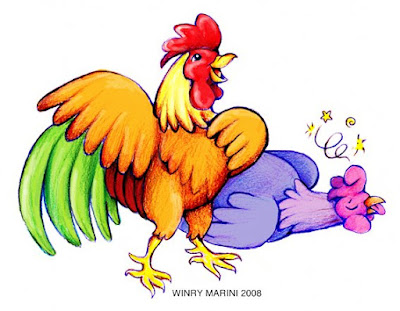 The concubine asked the palace healer to help her do the bad plan. They told the king that the queen wanted to poison him. The king was angry. He sent the queen to a jungle. It is the punishment for her. There was one condition that the king did not know, the queen was pregnant.

After several months lived in the jungle, the queen gave birth to a healthy baby boy. She named him Cindelaras. He grew up as a nice, healthy, and handsome young man. One day, while Cindelaras helped her mother to collect some fire woods, an eagle dropped an egg. He took the egg and carefully took care of it.

The egg hatched into a chick and then it became a strong rooster. The rooster had a magical skill. It was very powerful and skillful in fighting with other roosters. Besides that, the rooster could also sing. The song was about Cindelaras and his father, Raden Putra.

“My master is Cindelaras. He lives in the jungle. His father is a king. His name is Raden Putra.”

The rooster often sang the song.

The king was surprised, he asked who Cindelaras was. He then told the king about her mother living in the jungle. Later, the palace healer admitted his mistake. He said that the queen was innocent. She never tried to kill the king. The king was very angry. He ordered the concubine to be sent to jail. The king immediately went to the jungle to pick up his wife. He apologized for sending her to the jungle and made her the queen again. ***

Ayam Pelung or Pelung chicken (Pelung long Crower) is a poultry breed from Cianjur, Indonesia. The males (roosters) are considered to be "singing chickens", with contests being frequent in the Pelung area for the most melodious crowing. A full grown male may weigh 5-6 kg (12-15 lb) and stand up to 50 cm (18 in) tall.(wikipedia.org)

Ayam Cemani originated in Cemani village near Surakarta city on the island of Java, Indonesia. It was first time imported into Europe in 1998 by Dutch breeder Jan Steverink. Nowadays it is kept in the Netherlands, Germany, Slovakia and the Czech Republic. (en.wikipedia.org/wiki/Ayam_Cemani)

Ayam Ketawa or Laughing Chicken originated from Sidenreng Rappang (Sidrap), South Celebes, Indonesia. In Sidrap, people call it Ayam Gaga. Physically, this kind of chicken is like ordinary chicken. The specialty of this kind of chicken is its laugh-like crowing but sometimes, its sound is like a small turtle dove. (purpleslinky.com)

Ayam Sumatra or The Sumatra is a breed of chicken native of the island of Sumatra. Chickens were originally imported from Sumatra in 1847 to the U.S. and Europe as fighting cocks for the purpose of cockfighting, but today the breed is primarily kept for exhibition. 1883 is the year the Black Sumatra was first inducted into the American Standard of Perfection. (en.wikipedia.org)