The Legend of Kemuning Flower 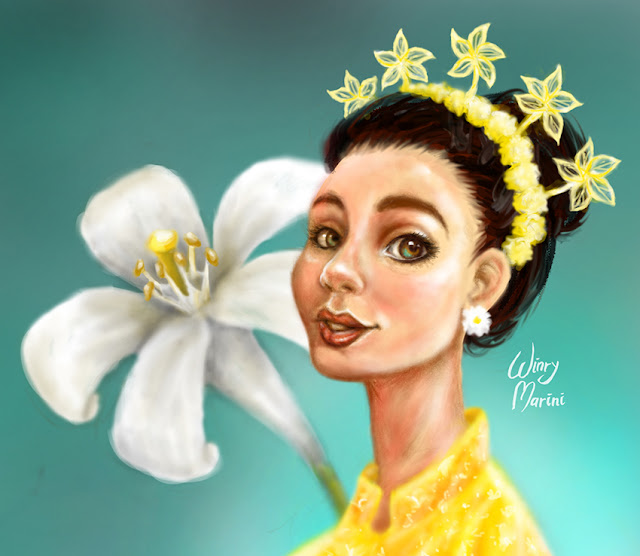 ONCE upon a time there was a wise king. He had ten beautiful daughters. His wife died a long time ago. All his daughters were named with colors.

The king loved all his daughters. However he was too busy with his jobs as the king. He asked the servant to take care of his daughters.

His daughter became spoiled. But the youngest daughter was different. She was not spoiled. She often helped the servants. They loved her very much.

One day the king planned to go a very far place. He asked what the gifts of the daughters wanted to have. They all said great things, like jewelries or beautiful dress. However Princess Kemuning did not say anything.

"How about you, dear? Do you want anything?" asked the king.

The king smiled. He knew his youngest daughter had good personality.

After the king went, all the daughters were fully take care by the servants. They had problems controlling the princesses. All the princesses became more naughty and spoiled. They often asked the servants to do anything.

The servants could not do anything. Consequently they did not have time to take care of the garden. It was messy. Leaves were every where. The garden was dirty.

"Hey, look, we have a new servant," said Princess Jingga. And they all were laughing at her. But Princess Kemuning ignored them.

Later the king came home. He brought all the gifts.

"Princess Kemuning, this green stone necklace is for you. I'm sorry, I could not find the yellow one. I have tried to look for it but I did not find it," explained the king.

"That is all right, Father. I love it," said Princess Kemuning.

Princess Kemuning often wore the necklace. It was very beautiful. It was matching with her yellow dress. Unfortunately, Princess Hijau were jealous.

"Kemuning, the necklace is mine. The color is green, right?" said Princess Hijau.

Meanwhile the king was looking for all his daughters. He did not see Princess Kemuning. The daughters said that Princess Kemuning ran away. But the king did not believe them. He asked all the soldiers to find her. But they never found her.

The king was sad. He often thought about her. One day the king was in the garden . There was a tree growing. The leaves were like green stone necklace and the flowers were yellow. The flowers reminded him of Princess kemuning. He named it Bunga Kemuning or yellow flower. ***