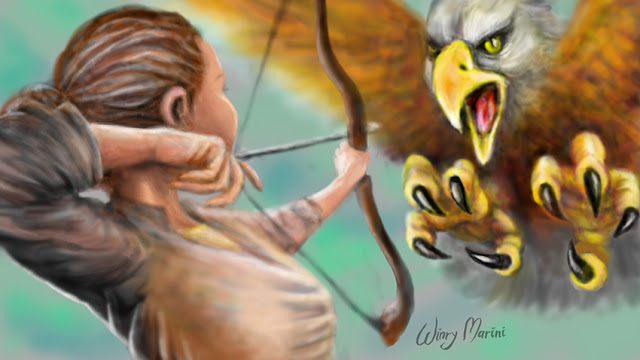 A long time ago in Belitung, there were a couple of husband and wife. The husband was a fisherman. The husbands name was Pak Inda and the wife’s name was Bu Tumina. They lived alone in their house. They did not have any children.

Pak Inda always went fishing in the morning. And in one morning as always he went to the sea. On the way there, he stumbled on a stick of bamboo.


"This is dangerous. Someone may get hurt with it," said Pak Inda.

He threw the bamboo to the sea. Then he continued walking. Again, he stumbled on a bamboo.

“Why are there a lot of bamboos here?” asked Pak Inda to himself.

He wanted to throw the bamboo to the sea. Before he did that, he looked at the bamboo carefully.

"I think this is the same bamboo I threw awhile ago. How can it be here again? "Pak Inda was confused.

He then threw the bamboo to the sea. Amazingly the bamboo kept on coming back to him. He knew that this bamboo was different from other bamboos so he brought it home. At home, Pak Inda told his wife about the bamboo. Bu Tumina suggested him to put the bamboo in a box. They put the box in their bed room. In the morning, they heard a baby crying. Pak Inda and Bu Tumina looked everywhere to find the baby. Finally they found a baby girl inside the box where they put the bamboo. However the bamboo was gone.

They taught her to be independent. They also taught her how to protect herself from wild animals. That was why Putri Pinang Gading grew as a great girl. One day, a giant bird attacked their village. The bird was wild. It hurt many people. Nobody dared to kill the giant bird. Putri Pinang Gading knew she had to do something. She wanted to kill the bird.

"Be careful my daughter. We love you very much and we don’t want anything bad happen to you. Here, take this arrow with you. The arrow has poison and it can kill the bird. Just aim it at the bird’s heart," said Pak Inda.

He knew his daughter could do that.

Wooosshhh! The arrow hit the bird’s heart! The bird fell on the ground and died instantly. The villagers were very happy. They thanked Putri Pinang Gading for her great action. On the ground where the giant bird fell, bamboo plants grew. The bamboos were poisonous. Later the villagers named the area as Membalong. It means poisonous bamboos. Membalong is now a district in Bangka Belitung. ***