The Legend of Komodo Dragon (Ora and Gerong) 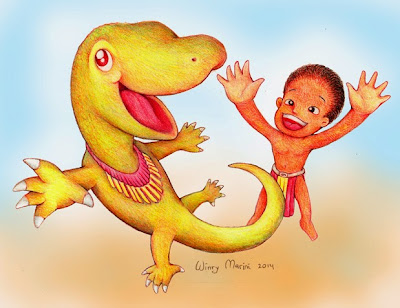 NAJO had a daughter named Epa who was awaiting the birth of her first child. Based on the tradition at Kampung Najo, the birth of a child should not be through the normal birth process, but must go through the 'surgical operation' by using a knife made of a bamboo. The tradition was carried out by local people to avoid the risk of maternal death.

Later, Epa stomach cut open by a midwife. She gave birth to twins. Strangely, one baby was a male, while the other was a baby lizard.

Epa and her husband, Wake, named their baby boy as Gerong while the baby lizard named Ora. Ora in the local language means lizard.

The different form of the twin brothers was grown with love and care of their parents. However, in  the growth process, Ora slowly show aggressive and violent nature.

Begin with the habit of eating rice 'rampi' which made from Gebang fruit trees, Ora character and appetite was slowly changing. He became malignant and often prey on people's pets.

All villagers expelled Ora due to the increasingly its dangerous attitude. He went and settled in the forest.

Though exiled from home, Ora still came to the village to meet its twin brother, Gerong. Until now, the relationship between the Komodo dragon with locals still intimate and emotionally felt very close.

The feeling is so strong and almost impossible perceived by outsiders or people who visit the village of Komodo. However, for the people of Komodo, the ancient animals are treated like siblings. They are not hostile to each other, instead, they respect each other.

Komodo may come in and roam freely in the village and could stay under the stage of the houses without being disturbed by the bustle of local residents. Locals also never feel disturbed or concerned the existence of ancient animal in their midst.

The local people considered the Komodo dragons as their ancestors and they honor them every year with a special ritual called 'aru gele' by pounding the gebang fruit.

The traditional ceremony 'aru gele' was a symbol for recalling Ora and Gerong’s parents who once had to feed their children with gebang fruits.

The Komodo dragon (Varanus komodoensis), also known as the Komodo monitor, is a large species of lizard found in the Indonesian islands of Komodo, Rinca, Flores, Gili Motang, and Padar.

The Komodo dragon is also known as the Komodo monitor or the Komodo Island monitor in scientific literature, although this is not very common. To the natives of Komodo Island, it is referred to as ora, buaya darat (land crocodile), or biawak raksasa (giant monitor).