A Monkey and a Bird 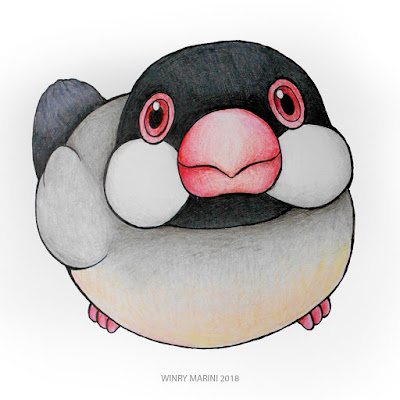 IT was a very hot day. A young duck was looking for some water. He did not only want to drink, but also wanted to swim. Rain had not fallen down for months and the duck terribly needed some water.

The duck did not give up. He knew he would find some water soon. He was right! From a distance he saw a small pond! He ran very fast.


Previously, he felt very weak, but when he saw the pond he felt very strong. He felt he had some extra energy to run. When he was standing at the side of the pond, he jumped and swam.

He drank, swam, and sang some songs. His voice made a big monkey woke up from his sleep. The monkey was sleeping on a branch of a tree. The tree was exactly at the side of the pond. The monkey could hear the duck clearly.

The monkey was angry.

"Hey, you! What are you doing here? You are disturbing me!"

"I'm so sorry, Mr Monkey. I did not know I'm disturbing you. Please forgive me."

"Forgive you? No way, you ugly duck! You don't deserve here! I own this place. I don't want to see an ugly duck like you hanging around here. Go away!"

The monkey threw some branches at the duck. Some of them hit the duck.

The duck left the pond. He was so sad when the monkey said that he was ugly.

A small bird was flying. He was so curious when a duck was walking and crying below him. He flew down and stopped in front of the duck.

"What's the matter my friend? Why do you look so sad?" asked the bird.

The duck stopped crying. He then told the bird about the monkey.

"Hmm... I know that monkey. You know what? That monkey does not have any friends because he is arrogant  and he always thinks that he owns that pond. He doesn't want to share the pond. I think it's time for me to give him a lesson," said the bird.

Later the bird flew to the pond. He was thinking of an idea. It was dangerous, but he was sure that his plan could stop the monkey from being arrogant.

"Hey, Mr Monkey! May I drink some water here?" asked the bird.

"No! Leave my pond now You are a small animal and I don't want to see small animals here!" said the monkey.

"What will happen if I don't want to leave this pond?" asked the bird.

"I will eat you!" The monkey was so angry. He jumped and grabbed the bird.

He put the bird inside his big mouth. The bird tried to calm down. He had a plan and he would do it. He defecated and left the feces on the monkey's tongue. The monkey felt there was something strange on his tongue. It tasted so disgusting.

"Yuck!" He opened his mouth and the bird did not waste the opportunity to fly away. The monkey tried to clean his tongue, but the feces stuck very hard. He was looking for something and then he grabbed a piece of bamboo to clean his tongue. However, he did not know that the bamboo was sharp.

His tongue was bleeding! The monkey was screaming in pain.

The bird responded, "I will help you, but you have to promise to be kind to other animals and also you have to share the pond."

"I promise," said the monkey.

The bird later helped the monkey. When the monkey was cured, he kept his promises. He was kind and shared the pond with other animals.***

The Java sparrow (Lonchura oryzivora), also known as Java finch, Java rice sparrow or Java rice bird, is a small passerine bird. This estrildid finch is a resident breeding bird in Java, Bali and Bawean in Indonesia. It is a popular cage bird, and has been introduced in a large number of other countries. (wiki)