The Story of Pari Temple 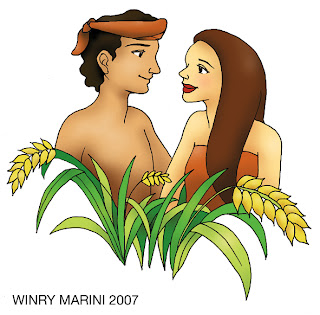 Although very beautiful, she was not married yet. That's why Kiai Gede Penanggungan prayed days and nights for her daughter. Finally, God answered his prayer. A young handsome man came to his place.


"My name is Jaka Pandelegan. I came here because I want to be your student. I want to learn a lot of things from you," said the young man.

"I will take you as my student but you have to marry my daughter. Agree?" Jaka took a deep breath.

Then he said,"Yes, I agree. I will marry your daughter."

Both Dewi Walangangin and Jaka Pandelegan lived a happy marriage. Especially Jaka, he was even happier.

"I know you can't live with me forever. Before you go, take this seed of pari. Every time people ask you, give them some. Don't be arrogant when you are rich."

After that, the couple left him and brought pari seed. Pari means rice.

Then, in the new place, they planted the seed. Soon, grew a lot of rice. Now the couple became very rich. The poor neighbors came to the couple to ask for some pari seed.

"No way! If you want to eat, you have to work hard like me!" said Jaka.

"Jaka Pandelegan, come here! I want to talk to you." But Jaka ignored him. He kept on doing his activity. "My daughter, Dewi. It's me, your father."

But Dewi also ignored him. Kiai Gede Penanggungan was really angry. He then said, "You two are like temples. You cannot listen to me."

Right after he said those words, an incredible thing happened. Slowly, Jaka and Dewi turned into temples. Because the temples stood among the pari, people then named them as Pari Temple. ***