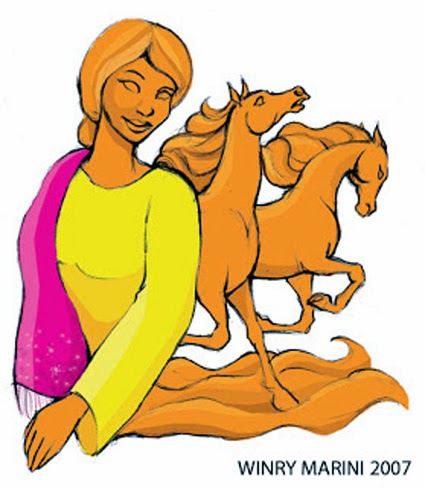 Once upon a time, there lived a famous sculpture in Tapanuli, North Sumatra. His name was Datu Panggana. He could carve wood into many things. One day, he got an inspiration to carve a wood into a statue of a beautiful woman.

Then, he put the statue in front of his house. It was not finished yet. The statue still had any clothes yet. Later, a young merchant passed by in front of the Delta Panggana's house. His name was Bao Partigatiga. He sold jewelries and clothes. He was very impressed by the beauty of the statue.

"She would be more beautiful by wearing my clothes," said Bao Partigatiga.

He then put on the clothes he wanted to sell on the statue. Bao Partigatiga was very pleased now. The statue looked like a real human. Then he left Datu Panggana's house. After that, a priest and his wife passed by. They were also impressed by the beauty of the statue.

"I want to pray to God to make her live like a real human. I want to make her as our daughter," said the priest to his wife.

The couple had any children yet. Their dream came true. The statue had changed into a very beautiful girl. The priest and his wife then took the girl home. They named her Nai Manggale. The news about Nai Manggale spread very fast. All the villagers came to the priest's house to see Nai Manggale.

Datu Panggana said, "She has to stay in my house. The statue was mine."

"She is wearing my clothes. So, she has to stay in my house."

The priest did not want to lose Nai Manggale.

"Remember, I am the one who made her live like a human. So, she stays here."

Those three men then were busy arguing. They claimed to have the rights of Nai Manggale. To calm them, an elderly of the village gave a solution. His name was Aji Bahir.

The three men accepted Aji Bahir's advice. And now they were happy because they all could ask her to stay in their houses. Besides that, now those three men were related. ***