The Legend of Malawen Lake 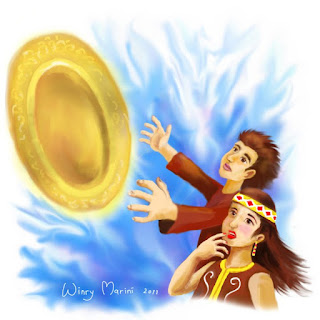 ONCE upon a time there was a husband and wife who lived near the jungle. They were very poor. They did not have any children yet. Every day they prayed to god to give them a child. One night the wife had a dream. An old man came to her and told her that she and her husband had to meditate for 100 days in the jungle. The wife told her husband about her dream. They hoped it was a sign from god to give them a child.

Later they went to the jungle. After spending for 100 days, they went home. And it was true! Not long after that the wife was pregnant. And nine months later the baby boy was born. They named him Kumbang Banaung.

Kumbang grew as a handsome and strong young man. However he was not obedient. He never listened to his parents' advice. And it happened again when he wanted to hunt in the jungle.

It was already dark and his parents asked him to wait until morning. But Kumbang ignored it. He insisted to go to the jungle to hunt.

His parents could not do anything. His father gave Kumbang a magic plate. The plate could help him in a difficult situation. After he received the plate, Kumbang went to the jungle.

It was dark and Kumbang could not see clearly. And he had to face the worst risk. He was lost! He kept on walking and finally he crossed the jungle. He arrived in a village. there was a party. Kumbang saw a very beautiful girl. He came to her and introduced himself.

The girl's name was Intan. her father was the head of the village. The party was her birthday party. Kumbang fell in love with her. And after the party was over, everybody went home. Kumbang also wanted to go home. He tried to memorized the way to go home. He was lucky. He could go back home. He arrived in the morning. His parents were so worried. Kumbang did not tell them about his experience. He planned to visit Intan again. And after his parents slept, he left the house.

Kumbang met Intan again. She was happy to see Kumbang. She also loved him. They continued to see each other in the following nights. And it made the villagers restless.

They did not like to see what Kumbang and Intan were doing every night. The villagers told the head of the village to do something. Intan's father had an idea. He came to a rich merchant and asked him to marry his son with Intan. The merchant agreed.

The head of the village told Intan that she would get married soon. Intan was so sad. She told Kumbang to propose her soon. Kumbang immediately told his parents. However they did not agree. They were poor and they thought it was not appropriate for him to propose a rich girl. Kumbang was so angry. He left the house. And he also brought the magic plate.

When he met Intan, Kumbang asked her to run away. And while they were leaving the village, some villagers saw them. They tried to stop the couple. Kumbang and Intan were running. They kept on running and finally they were at the side of a river. They had to cross the river but there was no sampan. Kumbang then remembered about his magic plate. He threw the magic plate to the river.

Amazingly, the plate grew bigger. He asked Intan to get on the plate. They used it as a sampan. While they were crossing the river, suddenly rain fell down heavily. There was a big storm. Heavy wind blew them upside down and finally they were drowning.