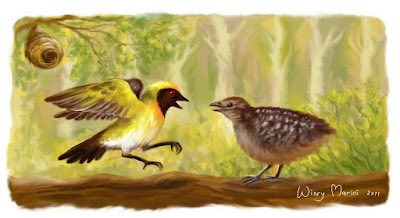 A quail and a weaver bird were best friends. Although they were very much different, they always helped each other. They always looked for food together. They met in the morning and looked for food until in the afternoon. At night they separated and went home to their own nest.

It was raining. The quail and the weaver bird were under a big tree. While they were waiting for the rain stop, they were talking about their nests.

"My nest is great. It is very clean and strong. I made it by arranging the old leaves and the twigs. I'm really comfortable living in my nest," said the weaver bird.

"Well, my nest is great. It is also very strong. And I don't have to be bothered making it. I just need to find a big broken tree and I can live there," said the quail.

"But compared to your nest, my nest is better," said the weaver bird.

"I don't think so. My nest is better than yours," said the quail.

They kept arguing. Each of them said to have a better nest. What started as a little argument then turned to almost a fight. To prove whose nest was better, they agreed to stay in their nests.

"Let's stay in my nest tonight. Tomorrow we will stay in your nest," said the weaver bird.

It was a late in the afternoon. They were going to the weaver bird's nest.

The nest was at a branch of a tree. It was high. The weaver bird did not have any problem reaching the nest. He was flying and in just a minute he arrived at his nest. Meanwhile the quail had problem arriving at the nest. He could not fly well. Instead, he tried to climb the tree. Finally he succeeded. He arrived at the weaver bird's nest.

The weaver bird and the quail shared the nest. They started to sleep. Suddenly, the rain fell down heavily. The wind was blowing strongly. The branches of the tree were moving back and forth. The The quail was terrified. He was afraid he would fall down.

"Do something! The branch is swinging. I don't want to fall down."

"Don't worry. We are not going to fall down," said the weaver bird calmly.

The weaver bird continued to sleep. However, the quail could not sleep at all. He regretted his decision to spend the night at his friend's nest.

In the morning, they looked for food as usual. And in the afternoon they went to the quail's nest. And when they arrived, the weaver bird was surprised.

"You live here? Under the big broken tree?" asked the weaver bird.

"Yes. And you don't have to worry with the wind. The tree is lying on the ground, so it won't swing."

Later, they started to sleep. Then rain was falling down heavily. Unfortunately, water was slowly approaching the nest. And they were finally wet.

There are three kinds of weaver in Indonesia

Tempua (Indonesian) or The Baya Weaver (Ploceus philippinus) is a weaverbird found across South and Southeast Asia.
Flocks of these birds are found in grasslands, cultivated areas, scrub and secondary growth and they are best known for their hanging retort shaped nests woven from leaves. (wikipedia.org)

Manyar Jambul (Indonesian) or The Streaked Weaver (Ploceus manyar) is a species of weaver bird found in South Asia. These are not as common as the Baya Weaver but are similar looking but have streaked underparts. (wikipedia.org)


Manyar Emas (Indonesian) or The Asian Golden Weaver (Ploceus hypoxanthus) is a species of bird in the Ploceidae family. It is found in Cambodia, Indonesia, Laos, Myanmar, Thailand, and Vietnam. Its natural habitats are subtropical or tropical seasonally wet or flooded lowland grassland, swamps, and arable land. It is threatened by habitat loss. (wikipedia.org)