Nyai Anteh and the Moon 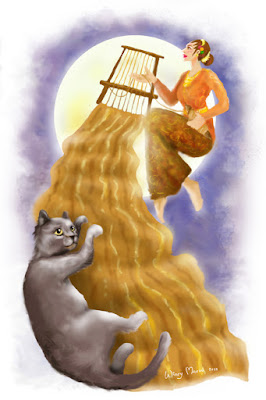 Anteh was more beautiful than Princess Endahwarni. She was often jealous with Anteh. However she still loved Anteh just like her little sister. The king and the queen thought it was time for princess Endahwarni to get married. A prince from a neighboring kingdom named Anantakusuma proposed the princess to marry him. The king and the queen had accepted the proposal. And it made Endahwani became very restless. She never met Anantakusuma yet.

A week before the wedding, Prince Anantakusuma came to talk about the wedding ceremony. While he passed the palace garden, he heard a girl singing a song beautifully. He came to the garden and saw a beautiful girl singing. He thought the girl was Princess Endahwarni. But he was wrong, the girl was Anteh.

Anteh was very sad. She never fell in love with the prince or wanted to be his wife. Anteh then went to her mother's hometown. She stayed at her uncle's house.

Years passed by and Anteh was married and have two children. She helped her husband to earn the living by working as a tailor. The dresses she made were very beautiful. She became very famous. People then called her Nyai Anteh.


Princess Endahwarni heard that Nteh became a famous tailor. She was very guilty asking Anteh leave the palace. She wanted to apologize to Nyai Anteh by asking her to stay in the palace again. She even asked Nyai Anteh to become the palace tailor.

Nyai Anteh had a pet. It was a cat. Every time Anteh was making a dress, the cat always accompanied her. Nyai Anteh was very happy that she could be back in the palace. But she did not know that prince Anantakusuma still love her. He secretly often looked at her. Although Nyai Anteh was not young anymore, she was still beautiful. And hat why the prince still loved her.


It was a beautiful evening and the moon was full. Nyai Anteh and the cat were in the garden. Nyai Anteh was weaving the dress. Suddenly the prince came to her.

"Anteh, I have to tell you something. I love you and I want to marry you."

"But that is impossible. I don't love you. You are married and I'm also married."

Nyai Anteh was very scared. The prince was forced her to run away.

Suddenly moonlight covered her body. Slowly the light lifted her and the cat. The light brought them to the moon.

The prince was very shocked. He regretted his behaviour. He was very sorry but it was too late. Nyai Anteh stayed in the moon and never came back to the earth.

People said that we still can see the image of Nyai Anteh and the cat during full moon. We can see that Nyai Anteh is weaving. ***