The Legend of Leech 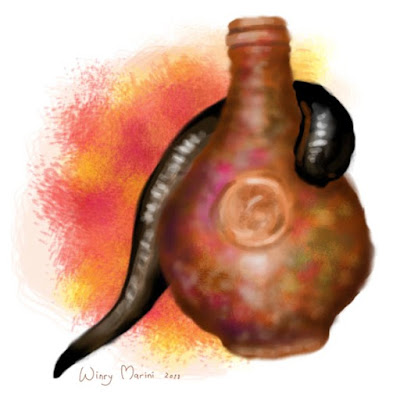 I Karma was a farmer. He lived alone. His father had died years ago and his mother had just died. Before his mother died, she told him a message.

His father put a bottle of coconut oil at the roof of the house. An old man gave his father the bottle. The old man said that the oil was guarded by a woman. I Karma never checked the bottle. He thought it was not important.

Several days after his mother died, a strange thing happened. Every time I Karma went home after working at the field, he always found some food. The house was also neat and clean. It seemed that somebody had cooked and cleaned the house.

It happened everyday. I Karma was very curious. And one day he went home earlier. He wanted to know who helped him. When he peeped through the window, he saw a beautiful woman was busy cooking. He immediately came inside.

"My name is Ni Utami. I'm here to help you," said the beautiful woman.

I Karma was so amazed with her beauty. He let her continue cooking. Time passed by and I Karma fell in love with Ni Utami. He asked her to marry him and she agreed. Ni Utami asked him to promise. He had to take care of her and their baby.

They were happy, especially when they had a baby. One day I Karma remembered of his mother's message about the bottle. He looked for the bottle. And when he found it, he saw the bottle was empty. There was no coconut oil inside the bottle. He thought the oil evaporated.

Everyday I Karma worked at the field. And in one hot day Ni Utami came to the field. She brought some food for her husband. She also brought their baby.

Ni Utami could not walk steadily. She was sweating a lot. And when she arrived at wellspring, She fell down.

Something strange happened. Ni Utami's body was slowly melting. She told I Karma that she was the woman inside the bottle who guarded the coconut oil. She was made of coconut oil and she could not stand with the heat.

She said goodbye to I Karma because she would change into coconut oil.

I Karma really felt sorry. But it was too late. His wife had left and would never come back. I Karma later went back home with his baby.

At night the baby cried. He was thirsty. I Karma fell asleep and he did not hear the baby was crying. The baby crawled and slowly he was next to I Karma. The baby bit I Karma's hand. He sucked I Karma's blood. I Karma screamed in pain. He ;push the baby and threw him to the floor.

Amazingly the baby changed into a leech. And when I Karma went to sleep, the leech again sucked his blood. This time I Karma could not release the leech from his body. He lost so many blood. Slowly I karma died. ***