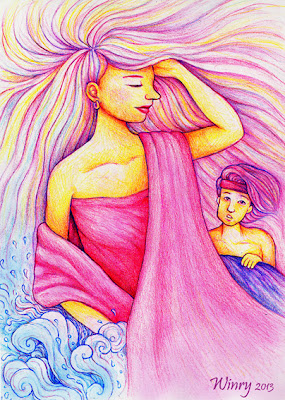 
Jaka Tarub was a handsome young man. He was very popular in the village. Many young girls fell in love with him. However Jaka Tarub thought that they were not beautiful enough to be his wife. That's why he was still single. He wanted to have a very beautiful wife.

As always, Jaka Tarub went to the forest to collect some woods. Suddenly he heard some noise from the waterfall. He was curious. The noise was from the girls taking a bath in the waterfall.

Slowly, Jaka Tarub walked to the area. When he arrived there, he saw seven beautiful girls taking a bath. He was really amazed by their beauty. After they were finished, the girls slowly took their shawls. Amazingly after they wore the shawls, they flew to the sky. They were not humans. They were fairies!

After that Jaka Tarub went home. He was very restless. He was still thinking about those seven beautiful girls.

"What's wrong? Why are you crying?"

"I lost my shawl. I cannot go back home. All my sisters have left me. My name is Nawang Wulan. I will give you anything if you can find my shawl."

"I'll help you. But if we can't find it, you can stay at my house. You can be my wife," said Jaka Tarub.

Then Jaka Tarub pretended to look for the shawl. And of course they could not find it. After that they went to Jaka Tarub's home. Later they got married.

They had a baby girl. They had a happy life. They always had enough rice to eat. They did not have to work hard like their neighbors. It was because Nawang Wulan used her magic in cooking.

One day, Jaka Tarub asked her about the magic. Nawang Wulan did not tell him the secret and asked him not to open the cooking pan's lid. She said that if Jaka Tarub opened the lid, they had to work hard to get a lot of rice to cook.

She then said, "I will go home now. Take care of our daughter. When there is a full moon, take her out of the house and I'll come together."

Nawang Wulan then flew to the sky. Jaka Tarub was really sad. And to keep the promise, Jaka Tarub always went out of the house with his daughter when there was a full moon. But Nawang Wulan never came back. ***