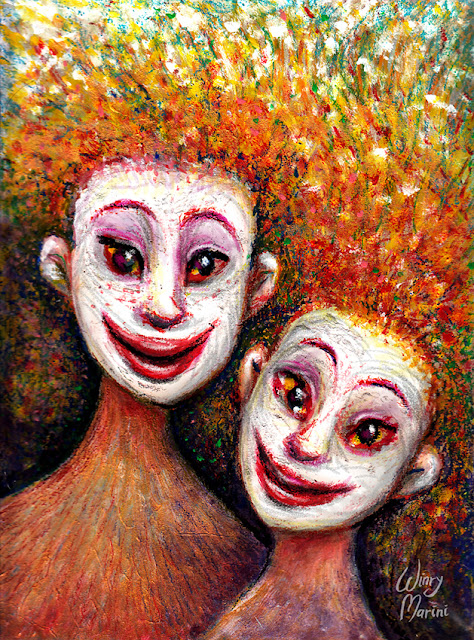 Folklore from East Java
A long time ago in East Java, there was a kingdom named Bintolo. The king had a very beautiful princess. Many young men fell in love with her and proposed her to be their wife. But the princess always refused the wedding proposal politely. She always said that she did not want to get married yet.

In the small village, there was a young man who lived with his mother. His father died a long time ago. The man’s job was a mask maker. He also fell in love with the princess but he did not have any courage to propose her. The man was ugly.

“How can I propose her? The princess even refused the proposal from handsome and rich men,” that’s what this ugly man always thought.

But he could not stop thinking about her. Days and nights the mask maker always thought the beautiful princess. He did not want to eat and he could not sleep either. Soon, the man was ill.
And that made his mother really worried about him.

“What's a matter with you? Is there something wrong? Please tell me.”

“I.. I... love the princess, Mother. But I’m not confident enough to express my feelings to her. I’m ugly and I’m sure the princess doesn’t want to marry me.”

The mother replied. “You are a great mask maker. Make a mask of a handsome face and wear it when you propose the princess.”

The man thought it was a great idea. He immediately made the best mask. And when the mask was finished, he wore it. Amazingly the mask really looked like a real face. So he went to the palace confidently.

“Your majesty, I’m here to propose your daughter,” said the man to the king.

“Stay here. I will talk to my daughter,” said the king.

The king then told his daughter that there was a very handsome man wanted to propose her.

And when the princess met the man, she fell in love with him at the first sight. She thought that he was the most handsome man in the world. Later the princess told the king that she accepted the man’s wedding proposal.

After the man told the truth about the mask, the princess was not angry.

“It is true I love you at the first time we met, because you are so handsome. But after I know you so well, I love you the way you are. Now, I want you to make the same mask you are wearing. I want to wear it in our wedding,” said the princess.

During the wedding, all the guests were surprised to see the bride and the groom were wearing the same masks. And that inspired some people to create a dance and named it Joged Topeng Kembar or Twin Masks Dance. Until now people in Lumajang, East Java, still do the dance. ***