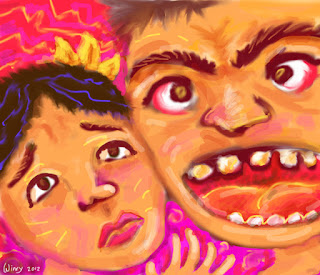 JANTUR and Menur were twins. Jantur was a boy and Menur was a girl and they had different personalities. Jantur was lazy, he got angry easily. He always said bad words when he was angry. However, Menur was a very kind, diligent, patient and always helped their parents. She always reminded her brother to behave well.

“Menur! Where are you? I'm hungry! Give me some food!” said Jantur.

“Be patient Jantur I'm still cooking, the food is not ready yet. Why don't you help me mop the floor? Father and mother will be home soon,” said Menur.

“Arrrgggh! What took you so long? I’m hungry, you are so slow!” said Janur.

And he said bad words to Menur.

Menur was very sad. She cried. When their parents went home, Menur told them about Jantur's bad behavior. Her father then advised him. However, Jantur did not want to listen to him. He ignored him, and it was getting worse. Jantur asked his parents and his sister to leave the house. They were very sad. They never thought that Jantur would ask them to leave the house.

After his parents and his sister left he house, Jantur lived alone. At first he felt very happy because no one disturbed him. He could do anything he wanted. He even spent his parents’ money for bad things. When all the money was gone, he sold his parents animals, cows, goats, cocks and hens.

Meanwhile, Menur and her parents lived in another place. When they left home, they did not bring anything. Because they worked very hard, they could build a new home and they had new animals.
They were rich.

How about Jantur? Soon all his parents’ wealth was gone. Jantur was lazy, he did not want to work. He wanted to have much money in an easy way. So he sold the last wealth, it was the house.

After Jantur sold the house, again, he spent the money foolishly. It was not surprising that Jantur became poor again. He did not have any money and he did not have a house. His body was very thin. He suffered skin disease, his skin was full of black dots.

Jantur did not have a way to go, he just walked and walked. Finally, he arrived at his parents’ house. Menur was in front of the house sweeping the floor. At first, they did not recognize each other. Menur thought that Jantur was a beggar.

“Are you hungry? Here, I have some food,” said Menur.

Jantur was happy. He was so hungry that he did not recognize his sister. However Menur knew him.

“Jantur my son, what happened to you?” said his mother. Jantur was surprised.

“Mother, is that really you? Father, mother, and Menur! Please forgive me. I was punished by God. I suffer an illness, I’m poor, and I don’t have a house to live. I have done bad things to you all. I promise I will be good,” promised Jantur.

The family now reunited. They have already forgiven Jantur and amazingly Jantur was cured. And as he promised, Jantur became a very good man. ***