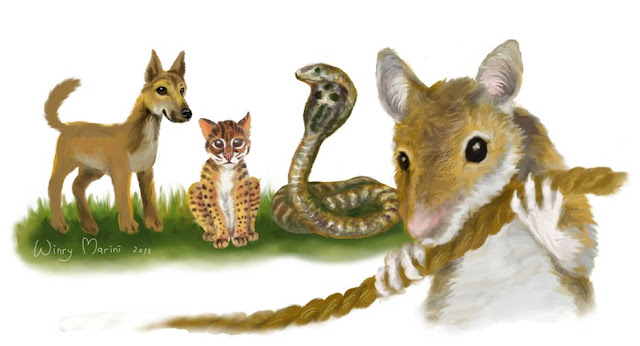 NI Timun Mas was a beautiful girl. She lived with her mother in a house near a jungle. Ni Timun Mas always helped her mother. When her mother worked in a rice field, Ni Timun Mas always stayed at home to clean up and cook. she was not allowed to go to the rice field. Her mother was afraid that a giant would kidnap her. Yes, there was a giant lived in the jungle. His name was I Latang Hidung. He loved to eat young people!

Her mother always went home in the afternoon. She always asked Ni Timun Mas not to open the door while she worked.

Sadly, it happened. I Lantang Hidung came to see the house. The giant was hungry. He banged the door. Ni Timun Mas was so scared. Because the door was not opened, the giant left. He was sure there was somebody in the house. He was hiding behind the trees.

And when her mother went home, the giant knew that the door would be opened when a song was sung. He planned to come back and he would sing the song. Ni Timun Mas told her mother about the giant. She was very happy that the door was not opened. Unfortunately, they did not know that the giant already knew their secret.

Of course Timun Mas thought it was her mother who came home. She opened the door and suddenly I Lantang Hidung grabbed her. The giant kidnapped her and brought her to his house in the jungle.

When her mother arrived, she was so shocked. The door was opened and her daughter was not home. She ran and cried.

While she was looking for her daughter, she met a man. He was beating a cat. She felt sorry. She bought the cat from the man and kept the cat.

Then she continued her journey, this time she saw a mouse was beaten by a man. She saved and bought the mouse.

Later, she met a man who was beating a dog. Again, she saved and bought the dog.

And finally she met a man who was trying to kill a snake. She also saved and bought the snake.

It was already dark. The mother decided to go home. She would look for her daughter later in the morning. At night, she remembered her daughter. She cried. The animals she saved were looking at her. They were curious. The cat asked her.

"Why are you crying?"

The mother was surprised. The animals could talk like humans. She explained that a giant kidnapped her daughter. The animals were so sorry. They wanted to reply her kindness. They would free Ni Timun Mas from the giant.

The animals went to the jungle. They saw the giant was sleeping and Ni Timun Mas was tied with a rope. They set a plan. The mouse would bit the rope. The cat would observe and told them when the giant woke up. The dog and the snake were ready to attack the giant.

The animals and Ni Timun Mas arrived home. Her mother was very happy. She did not worry anymore because the giant was dead, Since then, Ni Timun Mas, her mother and the animals lived peacefully. ***