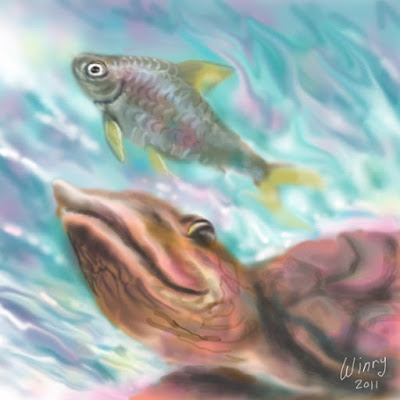 
ONCE upon a time there was long drought in Rembang, Central Java. Rain had not fallen in the place for a very long time. The air was very hot. All the leaves in the trees dried. The rice fields did not grow any plants. There was no source of water. Their only lake also dried.

The people were very thirsty. Children were dying. They did not get enough food and drink. Most of them were ill. Cattle also suffered from the drought season. One by one the cattle died. The villagers were very sad. For them, cattle were their precious things. They could not do anything when their cattle died.

Every day the villagers prayed to God. They wished to have rain. They really wanted to see rain fall so they and their cattle would have enough water to drink. And they also wanted to water their rice fields.

One day all the villagers had a meeting. They discussed how to stop the long drought.

"Sir, I heard there is someone who can help us. His name is Ki Mojo Agung. He has a great supernatural power. Maybe he can help us," said one of the villagers.

"Good! Do you know where he lives?"asked the head of the village.

"That's the problem, Sir. He lives very far from here."

"OK, then. I need some strong men to go to Ki Mojo Agung's house."

Soon some strong man had their journey to visit Ki Mojo Agung. They spent days and nights and finally they arrived at Ki Mojo Agung's house. They talked to him, and fortunately he agreed to help.

"I will help you. But you have to provide two things, a fish and a turtle. You can catch the fish and the turtle in the river there. Put them in this bucket. Remember, you have to keep the animals alive until we arrive in your the village. No matter how thirsty you are, don't drink the water. If you do, the animal will die."

The young men agreed. While they were trying to catch the fish and the turtle, they drank some water. They were so happy. and after they caught a fish and a turtle, they went back home. Ki Mojo Agung also joined them.

On the way back home, the young men started to be thirsty. One of them tried to drink the water in he bucket. Ki Mojo Agung was angry. He asked the young man not to join them anymore.

Because the water came out in front of the cave, the people named the cave as the sacred cave or Gua Keramat. ***