The Legend of Batu Hapu Cave 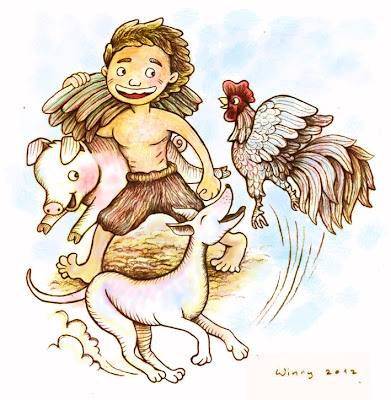 IN Tapin, South Kalimantan, there is a tourist destination. There is a cave and people name it Batu Hapu Cave. Local people say that there is a legend how the cave was made. Do you want to know the story? Read on!

There was an old woman who lived with his only son. The woman's name was Nini Kudampai and her son's name was Angui. They were really poor while Angui was still a kid. He was kind and very helpful. His father died when he was a baby. Though he was very young, he behaved like an adult. He knew he had to help his mother to earn a living. And that made his mother loved him very much.

Angui had three pets. They were a white pig, a white dog, and a white cock. He liked playing with them after helping his mother. It was a beautiful day when Angui was playing with his three pets. A rich merchant was passing Angui's house. He stopped and paid attention to the kid. He liked Angui very much. He asked some people about Angui. And when he knew that Angui came from a poor family, he wanted to adopt Angui.

Nini Kudampai was so touched. She was in a big dilemma. She was happy that her only son would get a good education, however she was also sad that she would not see son anymore. She agreed with the merchant's plan. She let him adopt her soon.

With a big ship, the merchant and Angui sailed to the city. He raised Angui very well. He sent Angui to the best school. And he also taught him how doing business. Angui was smart. He could understand everything very fast. The merchant was very happy. He slowly gave some of his business to Angui. And Angui paid the trust by giving the merchant a lot of profit.

Angui had fallen in love with a girl. He knew it was time for him to get married, especially when the merchant had promised to give him all the business. He did not waste much time. Angui proposed the girl and the girl happily accepted him.

Angui and his wife were very happy. Also, they were very rich. The merchant remembered his promise to Nini Kudampai. He told Angui to go home. But Angui refused. The merchant then reminded Angui about his promised. His wife also asked Angui to go to his hometown. Angui gave up. He asked his crew to prepare his ship. They would sail to Tapin.

The news spread very fast. People were talking that Angui would go back home. His mother finally heard the news also. She brought  Angui's pets, the white pig, the white dog, and the white cock.

Nini Kudampai was standing at the harbor. When she saw Angui, she called out his name. Angui saw his mother. She looked very old and shabby. He was ashamed. His wife asked him who the old woman was, but he said that he did not know her. He then asked his crew to continue sailing. The ship did not stop.

Nini Kudampai was so sad, and she was also very angry. She cursed Angui for ignoring her. She had been waiting for her son to come back. And when he arrived, he ignored and did not want to admit her as his mother.

God heard the old woman's praying. Suddenly the rain fell down heavily. Thunder attacked the ship. It turned upside down! The ship finally stranded. Slowly the ship changed into a big stone. Later, the big stone slowly changed into a cave. People then named the cave as Batu Hapu Cave. ***