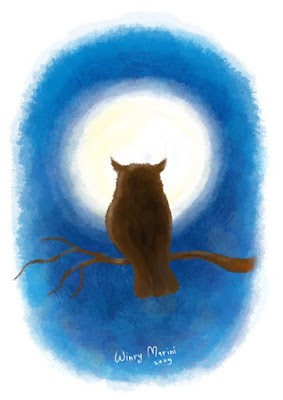 A long time ago, a man lived on the moon. His name was Jangga. He lived with his mother. Jangga loved hunting. Everyday he went hunting with his dog. His mother often told him not to go hunting too long. But Jangga often ignored her.

One day Jangga and his dog went hunting as usual. He was looking for the animals. However, he could not find any of them. Sadly, he was lost. He could not find a way to his home. While he was walking, suddenly he saw an old woman.

Apparently, it was a family. The old man and the old woman had a beautiful daughter. Jangga told them that he was lost. He said that he lived on the moon. The old man said that Jangga was really far from home. They were on the earth.

Jangga was so sad. He could not go back to his home and meet his mother.

The old man offered Jangga to stay at his home. Jangga agreed.

Day passed by ans soon Jangga fell in love with the old man's daughter. Then they got married.
Jangga still enjoyed hunting. With his dog, he often went hunting in the jungle. His wife often told him not to go hunting too long. However, Jangga ignored her.

Jangga's wife was pregnant. She often asked Jangga to stay at home and not to go hunting. Again, Jangga ignored her. Her wife was often angry with him.

In the morning, Jangga wanted to go hunting. This time his wife was really angry.

Then he left his wife. Not long after that Jangga's wife delivered a baby boy. She was so angry that her husband was not next to her. She did not want her husband to see the baby.

Later Jnagga came home. He heard a baby was crying. He was so happy.

"Where is the baby? I want to see my baby," said Jangga.

Jangga was so sad. Ans he was also very angry! He went outside of his home. His dog followed him. After that he prayed. He called out his mother.

Suddenly thunder attacked the place. Dark cloud covered him and his dog. Surprisingly, Jangga and his dog disappeared. Not long after that the baby was dead. Jangga brough the baby spirit to the moon.

The Gods heard how she cried and they didn't like it. The were upset with her and changed her into a bird. People named the bird as pungguk bird.

Until now, during full moon we still can hear the sound of pungguk bird. And we can also see the image of a dog in the moon. From the legend, people make a proverb.

It says, "Sama seperti pungguk yang menunggu bulan" which means "Just like an owl waiting for the moon".

It means that it's just waiting in vain.***